A recent press release from the Department of Energy indicates that in just five years the solar industry has achieved 90% of its 2020 Sun Shot goals[1]. This is a big deal and reflects the remarkable growth of the solar industry in recent years. The DOE’s Sun Shot Initiative was launched in 2011 with the goal of making solar electricity cost-competitive with traditional energy sources without subsidies by 2020. Recent Spiezle projects reflect this trend.

The 2020 Sun Shot goals established targets of 9¢/kWh (per kilo-watt hour) for residential projects, 7¢/kWh for commercial projects, and 6¢/kWh for utility-scale projects. These are ambitious targets considering that in 2010 costs were 42¢/kWh, 34¢/kWh, and 27¢/kWh respectively. In light of these huge market advances in the cost and performance of solar, the DOE announced 2030 goals to reduce costs even further. 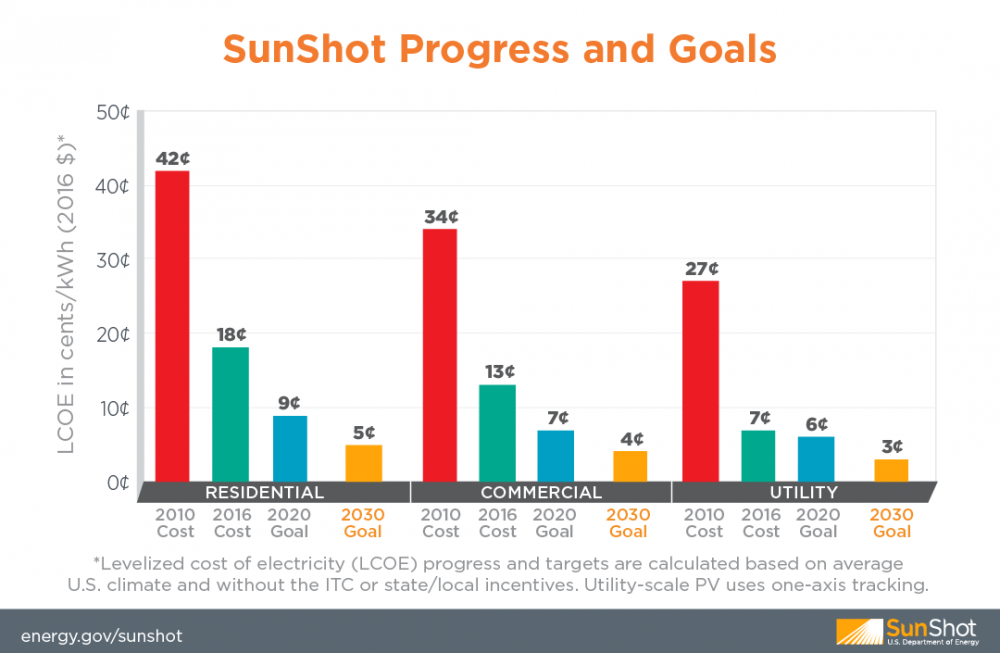 According to the DOE, if utility-scale solar hits the 2030 targets it would be among the least expensive options for new power plant generation. The U.S. Energy Information Administration’s 2016 report[2] of levelized cost of new power generation predicts the following costs for new generation facilities coming on line in 2022. 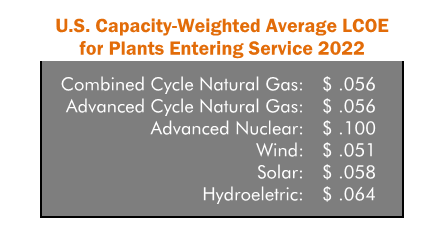 The trends we are seeing in the market place are positive.  Electricity costs have declined over the past 5 years, although predictions for 2017 indicate a 2.6% increase in the average cost of electricity. The average price of electricity for New Jersey has declined 8% over the past 5 years compared to 0.68% for the U.S. in general[3]. Much of this can be attributed to the glut of inexpensive natural gas here in the Northeast, and our New Jersey fuel mix which is 64% natural gas, 32% nuclear, less than 2% coal, and a little over 2% from renewable sources.[4] But natural gas prices are on the rise, and 2017 predictions anticipate that. Solar PV’s installed cost on the other hand continues its dramatic decline.

A 2015 report from the National Renewable Energy Laboratory (NREL)[5] indicates that the average installed cost of commercial scale solar PV is $2.13 per kW. New Jersey average costs are $2.23 per kW, with higher costs generally attributed to labor. Pricing in New Jersey is within striking distance of the Sun Shot goals at roughly 7.8¢/kWh.

This is good news for our clients. Solar PV can now be integrated into building systems design with far less cost and risk. Its impact on energy use and cost is impressive. Through 2019, customers can qualify for a federal tax credit on installed systems further reducing the final cost of the system. If electricity prices begin to rise as predicted, annual cost savings will rise as well. When you factor in revenue from SRECs (solar renewable energy credits) the return on investment gets even better.

The SREC market in New Jersey is more generous than neighboring states, but like any commodity it is subject to fluctuation. SREC pricing, currently at around $180 per rec (1 rec = 1000 kWh), is a settlement price for 3-5 year contracts. SREC pricing beyond 5 years is very difficult to predict, so we recommend at least a 25% discount factor when considering future revenue projections. When we talk to clients now about the benefit of solar PV, we focus on declining costs of systems and the utility cost savings, and less on future revenue streams. The bottom line is that solar PV is a cost effective building energy system that can be accommodated in current project budgets.

A recent project for a NJ school client is a case in point.  We first planned solar PV additions for three of the district’s schools in 2011 as part of an energy savings improvement program. By the time the project went out to bid in early 2012, the floor had fallen out of the lucrative New Jersey SREC market and the project, like many other planned solar projects, was shelved. A lot has changed in four years. The economy and the market for solar PV have improved, the installed cost of solar PV has dropped, and the SREC market in New Jersey has stabilized.

This fall the project went out to bid again as a solicitation for a power purchase agreement (PPA). Six firms responded with proposals to install 1,830 kW of roof-top and ground-mounted solar PV, and provide electricity at reduced cost over a 15 year period. Because this project is structured as a PPA, electricity cost is the primary factor for consideration, but some insight into the competitive cost of systems installation can be extrapolated from the bids.

The benchmark cost of commercial electricity in the State is 12.54¢, of which roughly 4¢/kWh goes to distribution, societal benefit and other charges (Non-generation charges vary based on the Utility provider). This means the average commercial customer pays about 8.5¢/kWh for electricity generated. Some customers pay more or less depending on whether they purchase electricity through a third-party provider. Peak season demand charges further skew monthly electricity costs.

Six firms proposed electricity pricing ranging from 4.0¢ to 7.5¢/kWh – all less than the 8.5¢ average and less than what the client is actually paying. Annual escalation rates tend to be 2% which is below the short-term price increase predictions for 2017. The average savings across bidders is approximately $353,000 per year. The client can also expect additional savings from reduced demand charges.

One bidder confirmed that their installed cost would be $2.10 per kW. A non-scientific extrapolation of bids indicates that the probable installed costs for bid systems range from $2.02 to $3.57 per kW, with the average cost being $2.24 per kW – in line with the New Jersey average.

The 15-year agreements include monitoring and maintenance contracts, relatively slim profit margins, and developers get full benefit of SREC revenue and any available tax benefits, which taken together provide the basis of the developer’s profit. The client gets reduced electricity costs and predictable annual costs for budgeting purposes. The $353,000 annual savings (1% of the District’s annual budget) can now be used for other energy or capital improvements to district facilities, or be used to enhance educational programming without impacting school taxes.

However the client chooses to proceed, it is clear that solar PV is a cost beneficial addition to their buildings and district energy plan. Pricing is now at a level which makes solar PV a desirable option for new construction and building retrofits. Whether our clients choose to purchase the systems outright and keep the SREC and tax benefit, or decide to pursue a PPA, there are multiple benefits and savings can be significant in the long run.

The Sun Shot Initiative is demonstrating that solar PV is transforming our ability to generate clean renewable energy reliably and cost effectively. We are seeing this play out in our projects and our clients agree.